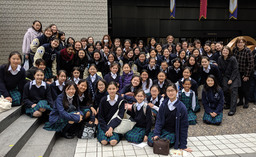 Orchestra and Grade 10 Music Elective Trip to Suntory Hall
Nov 15 2019 2:39 PM
On Wednesday, November 13th members of the Sacred Heart Orchestra and the Grade 10 Music Elective were treated to a performance of Stravinsky's Rite of Spring by the Vienna Philharmonic at Suntory Hall. Students listened to a brief talk from the conductor and then enjoyed a thrilling performance of one of the most iconic pieces of the 20th century, a work depicting ancient barbaric pagan rituals of spring.
Following the performance they watched a rehearsal with the orchestra and world-renowned pianist Yefim Bronfman as the musicians put the finishing touches on a piece that was to be performed later that evening; Rachmaninoff's 3rd Piano Concerto in D minor.