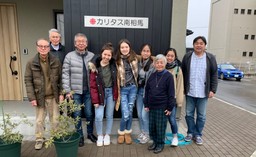 Four high school students in the Social Service Council have taken part in an overnight trip to Fukushima from February 20-22nd. It was an eye-opening experience for them, as they were able to visit the areas that were fully destroyed by the triple disaster on March 11, 2011, and were able to directly communicate with survivors, as well as understand the ongoing development to allow decent living conditions. They had the opportunity to volunteer at Sayuri Kindergarten, which Sacred Heart has supported by helping fund for their indoor sandpit (which was used when the levels of radiation were too dangerous for the children play outside). They able served food to those affected by the Typhoon no. 19 in Miyagi. On the second day, they had the opportunity to go on a tour to see the areas of Fukushima that are still uninhabited, and observed the amount of work put into decontaminating the soil.