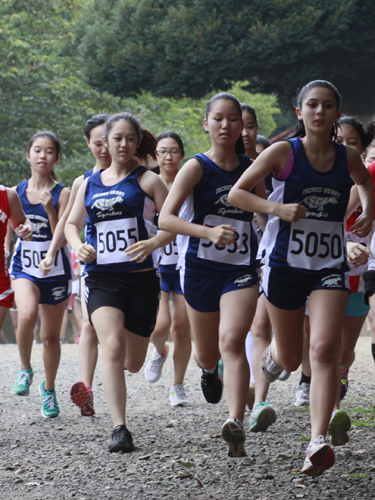 Cross Country at Sacred Heart is held during the fall sports season. The girls who take part are self motivated, driven, and confident athletes that enjoy running and the benefits it offers. The girls train three to four days a week, running distances between 4 and 7K preparing for races that fall on Saturdays. In the past few years Sacred Heart has had great success in both the middle and high programs, winning finals in 2013 and league champions in 2012. The sport offers a chance for all athletes to compete not only against themselves but rival schools in the Kanto Plain. The top seven high school girls take part in the Asia Pacific Invitational Tournament. This is a fantastic event that allows our girls to race against more than 20 schools from several countries around the Pacific.

JV & Varsity tennis is an advanced program based on a modern tennis methodology allowing students to join a team representing their school and compete against other international schools in the Kanto (wider Tokyo) area. The program helps create well-rounded student athletes, develops responsibility and teaches sportsmanship. Our teams’ performances for the past few years (first time in the School history league champions for the two consecutive seasons – 2012 and 2013) have earned us place amongst the strongest teams in the area. The tennis teams train and play on the school courts. We also travel to other locales farther afield for tournaments.

The Varsity volleyball team ended the 2018 season with a Far East tournament held in Humphreys Base in South Korea from the 7th to 11th of November.

This year’s team was a very new team compared to last year with Mr. Griffiths coming back to coach after 2 years and only 2 players returning to varsity after 7 seniors graduated last year. The team also consisted of more underclassmen than the upperclassmen - 3 Freshmen, 2 Sophomores, 2 Juniors, and 2 Seniors - the youngest in Kanto Plains and at the tournament as well as in the history of Symbas volleyball team. Our first challenge, therefore, was to get used to each other’s playing style in a sport where teamwork takes a vital role in even scoring 1 point in the game. Throughout the season, we improved our ‘on court’ positioning and also being more mentally focused to fight out every point in every set.

Our strongest emphasis for this season was on attacking play. With the motto “always stay attacking”, we focused on taking risks;

With this in mind, the team was successfully able to build throughout the season taking sets from every major team in the Kanto league and ending the year with five wins. Our challenge for next season is to take a step further to take complete games from all teams. We are already looking forward to stronger years in the future given the experience gained throughout this season and the rapid improvement of all Symbas volleyball players.

The basketball season for the JV and Varsity teams start around mid-November until the end of February. Both teams compete against other International schools within the Kanto region as well as at a tournament which takes place towards the end of the season. Every year, the varsity team participate in the Far East Tournament where they compete for the championship. The JV team also compete in at least one JV tournament. Alongside learning the fundamentals and tactics of basketball, the players get to be in an environment where they can use life skills such as team work, communication and leadership skills.

Netball is a team game, which means there are two aspects of becoming a successful player. First you have to learn the skills of the game - how to catch and throw, to shoot for goals, and to move in attack and defence. Then comes the real challenge: to use these skills effectively with other team members to produce a winning netball team. Netball is a winter sport at Sacred Heart and is very popular. We produce teams at all grade levels from 3rd grade through high school and each section practices once a week after school. We play fast and hard and have fun perfecting our skills.

The soccer season begins in mid-February and continues through early May. Both the Junior Varsity and Varsity soccer team trains in the gym and on the playground. Some practices take place on full-size astroturf fields in Tokyo. The team competes in the Kanto League against other international schools and DoDDs schools in the Kanto (wider Tokyo) area. The Varsity season ends with the four-day Far East tournament. In 2017, the Varsity team won the league and reached the Far East final.

Track and Field is a great opportunity to improve overall athleticism in our girls. Students participate in a wide variety of events both on the track and in the field. Track events such as sprinting, hurdles, long distance and relay are all about running while field events are broken into jumping events such as high jump, as well as throwing events such as shot put. It is one of few sports that really incorporates individual skills and success alongside the team success and camaraderie. Meets take place on Saturdays and are a great atmosphere of competition and fun.